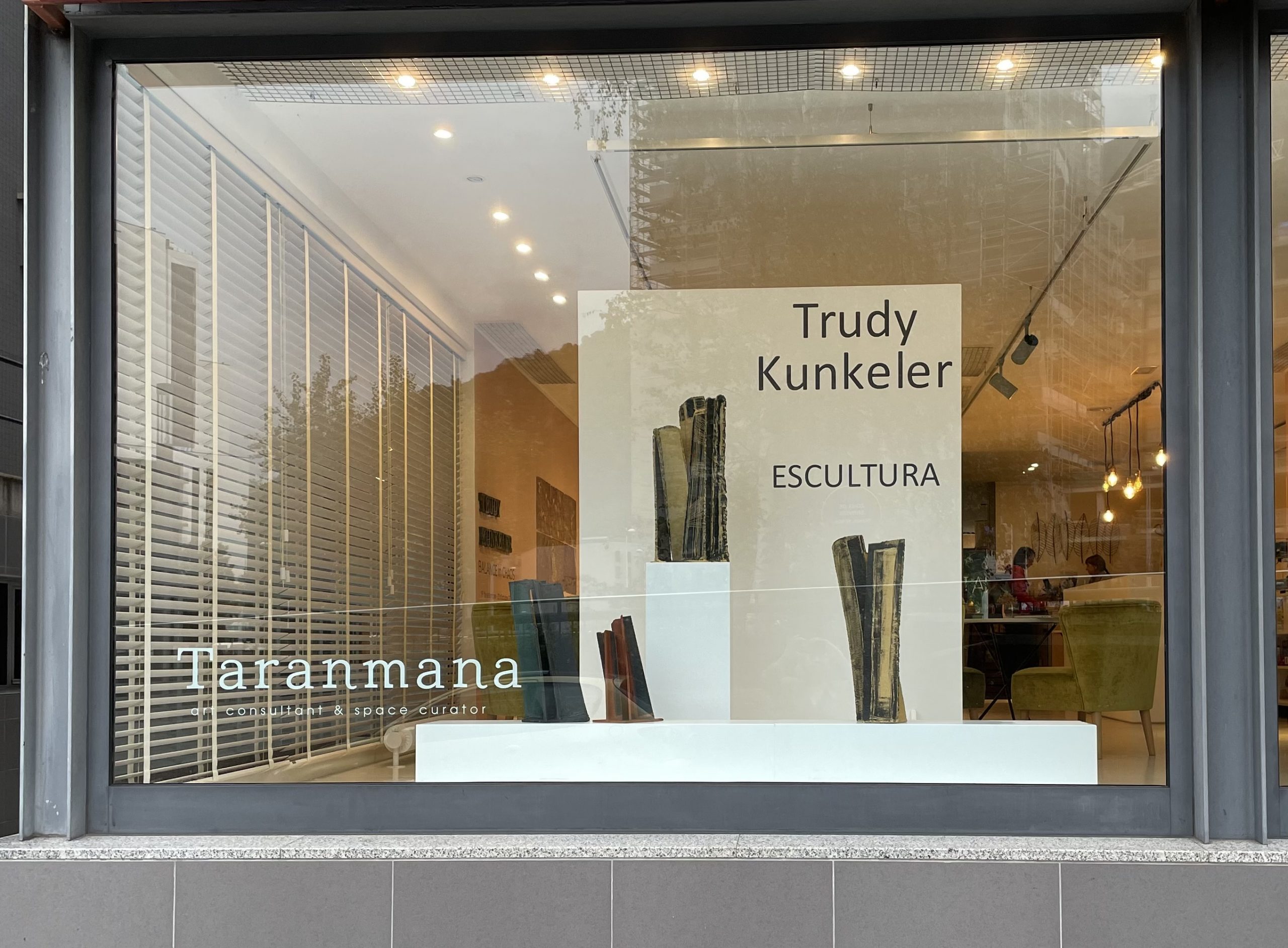 Pigments the colors of the earth: soft moss-colored greens and browns, ochres of rich
sienna, in reds and yellow, and burnt terra-cotta’s – reminiscent of iron and oxides naturally
found in clays – color the sculptures exhibited at the Taranmana gallery this September.

Trudy Kunkeler (Dordrecht, 1944) works on the representation of nature, its constant
transformation, caused by human being or geological activity: the collision of continents,
clashes of earth, rockslides and timeless erosion.
Her inspiration comes from the surrounding nature; she specifically engages in the idea of
landslides, as an important part of her work is about geographical activity – as the following
titles indicate, that correspond to 3 different themes in her work: Fragmentation, Shifting
matter or Change of elements.

The origin of the exhibition – Balance in Chaos – dates back to 2015 with the work entitled,
Skewed. Trudy explains that “it was made in my studio in Barcelona; the other series that
also originated in Barcelona is the Seascape Series which I worked on alternately between
the two studios, Barcelona and Dordrecht (NL), between 2010 and 2015”.

She also states that “due to the pandemic I did not get back to Barcelona between March
2020 and July 2021 and when I finally returned, I perceived the work Skewed in a different
way, under a new and fresh aspect; that is when I started the new series Balance in Chaos.”

“In addition to the sculptures, the exhibition consists of a series of 6 photographs of details
of rocks and water, that I put together with a series of photocopies of the execution of the
work and which I combine with photos of newspaper clips and with images of spectacular
views”. I think that these photos and copies with the title of the works help to clarify what I
am doing.” she adds.

This exhibition deals with an ordered chaos, or chaotic order, that the artist observes in
these processes of transformation, investigating on the evolution of earth, both on matter
and humanity. Trudy Kunkeler represents and expresses through clay, the destruction and
construction of nature; hers is a language of forms that she transforms into new landscapes
of architectural ceramics. A very architectural sculpture that the artist leaves in its pure
state, at times unfinished and – that due to its very angular geometric shapes with these
almost primary touches, recalls the brutalist architectural movement of the 1950s.

In each new project the artist produces a sculpture preserving something of the previous
shapes to include in the following series of work. Trudy disassembles her environment into
elements which she builds up again into new architectural unities from the strata of
memory.

Every sculpture represents a small piece of nature. The artist molds and sculps the clay into
shapes built up of flat tiles in a color palette close to the earth, in deep orange browns to
brick reds, that she structures and positions in slanted and crisscrossed layers so as to
recreate a geological feature; like a stratification of rocks – as if mountains pushed upwards
by the shock of the continents – into slanted peaks with jagged edges and ridges, and
textured with engravings of beautiful latticework.

Trudy Kunkeler studied vocational training in ceramics and crafts in Rotterdam and at the
Free Academy in The Hague, where she studied ceramics and glazes with Emmy van
Deventer, among others.
Subsequently, she did a first year of training at Escola Massana in Barcelona with a
scholarship from the Ary Scheffer Fund, followed by a second year at the invitation of Professor Maria Bofill.